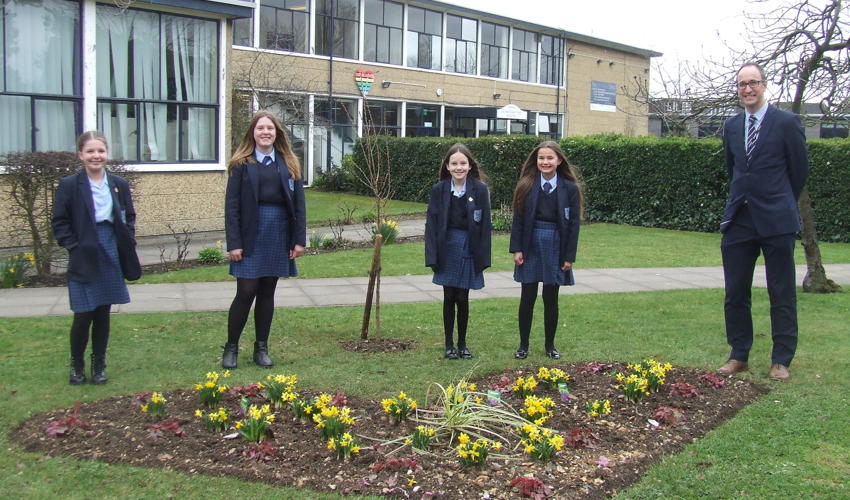 Schools were invited to apply for funding to CAHMS for the commissioning of a project to celebrate Feeling Good Week 2021 which was in February. Due to the pandemic, time scales were relaxed. Our bid was to build a garden which would be titled “Memories of 2020”. The garden was designed by Year 7 students who we felt had been impacted the most by the pandemic as not only had they had the ending of their primary years curtailed but they had not experienced a normal transition to their new school.

Year 7 pupils in our Support School were invited to design a garden and suggest items which would then be placed in a time capsule and buried beneath it. In addition, all Year 7 pupils and all staff were invited to send in words which they associated with lockdown; these would also go in the time capsule. Whilst discussions were had about the new time capsule, it was pointed out that another time capsule was planted at the front of the school in 2003 and so it was decided that this would be dug up and re-buried with the new one. Items that went in the capsule included a face mask, hand sanitiser, latex gloves, a Covid test, some rainbows and copies of the Government slogans used during the pandemic. Together with the words which included Wellies, Hope and Family from staff and Confused, Zoom, Depressing and Lonely from pupils.

Both time capsules were buried under the garden which the pupils decided should be heart-shaped and named “Memories of 2020” together with a cherry tree which was chosen due to the blossom it produces. The tree and another which was planted because of the project also forms part of the ‘Plant Britain Scheme’ where 750,000 trees are being planted nationwide which is in line with the number of children starting primary school this year.

The garden will serve as a lasting reminder of this pandemic for generations to come and it has been placed at the front of the school so that it can be enjoyed by the passing community.

Mr Jeremy Scott, Headteacher said, “The year 2020 will always be associated with the global impact of Coronavirus and as we approach the anniversary of the first lockdown, I am delighted that the pupils and staff of the school have found a such a beautiful way of marking such a difficult time. The garden reflects the heart that so many have shown in our community to offer support both to loved ones and strangers while the flowers represent the hope of new life and opportunity as we emerge from this pandemic.”